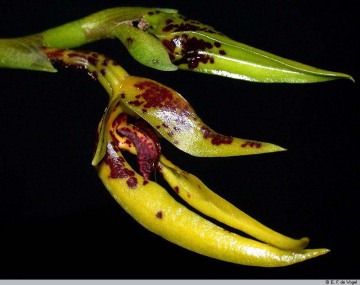 Large epiphytes. Rhizomes creeping; rhizome bracts thin to thick, glabrous, caducous including the veins, or veins longer persistent as fibres. Roots mainly from below the pseudobulbs, spreading and densely and coarsely papillose-rugulose-verrucate. Pseudobulbs conspicuous compared to the size of the plant, 1-leafed, with shoots from its basal node, not fused to the pseudobulb. Leaves persistent, thick; veins inconspicuous. Inflorescences from the (sub-)basal node of the pseudobulb, single, usually an elongated raceme with distichous flowers. Peduncle longer than the pseudobulbs, peduncle bracts 4—8, scattered with the upper one up to somewhat above half-way the peduncle. Rachis not or hardly thickened. Flowers large, per inflorescence usually 1 open at a time; floral bracts amplexicaul and usually proximally tubular; pedicel with the basal node well above the attachment of the floral bract (sometimes only slightly above the attachment in the lowermost flower), longer than the ovary. Sepals free, the lateral sepals 1—1.7 times as long as the median; to 23 cm long, elliptic to triangular, obtuse to long-caudate, glabrous, rather thin to thick, 5—13-nerved. Petals 0.45—9.5 cm long, elliptic to triangular, obtuse to caudate, glabrous; thin to thick, 3—12-nerved. Lip mobile on a thin ligament, often with (in-)conspicuous, antrorse auricles close to the base, and sometimes with a second or even a third couple of much smaller auricles closer to the base, undivided, elliptic to oblong, to triangular, margins entire, sometimes somewhat erose, glabrous; adaxially without ridges, or with two inconspicuous or distinct, entire to erose ridges in approx. flexural position, sometimes with two more short or even knob-shaped ridges close to the ligament, adaxial surface glabrous to partly or entirely papillose, verrucate, echinate, or fimbriate; abaxial surface glabrous. Column with rostellum front receding in between the stelidia tips; stigma small or large, with 3 keels inside (two on the front wall, a single on the back wall), at the base often more or less protruding or with a tooth; column foot tapering towards its top or not, approx. without lateral lobes next to the ligament, free part short or absent, sometimes with a small a median tooth well above the ligament; stelidia 1/2 the length of the column or longer, long subulate, often with an (antrorse) tooth or wing along the upper margin, with or without a deltoid, rounded to obtuse wing along the lower margin; anther abaxially with a low to very high, rounded crest, in front not concave, front margin not or hardly drawn out; pollinia 4, the inner more than half as long as the outer, without appendages.

Lowland forest to montane forest. Altitude up to 1900 m

All species share papillose-rugulose-verrucate roots and a distichous raceme. 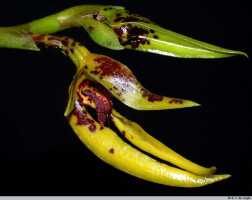 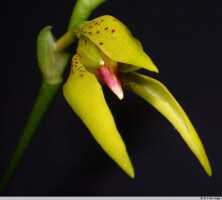 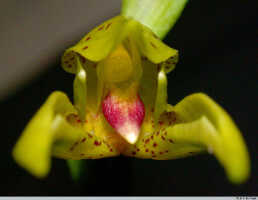 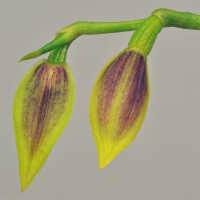