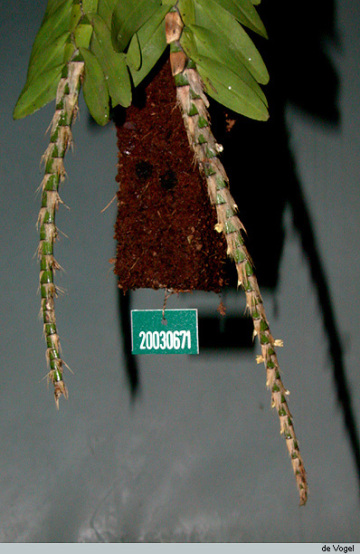 Inflorescences not arranged in a head but along the elongated leafless apical part of the stem, otherwise as sect. Agrostophyllum.Epiphytes, medium size to large, glabrous. Rhizome short, creeping. Stems tufted, close together, rather woody, not branched, erect, sometimes pendulous, stiff, terete to flattened, with many leaves, entirely covered by the leaf sheaths, the leave blades at the stem base later deciduous. Leaves distichous, rather stiff herbaceous, articulate between sheath and blade; leaf sheath clasping the stem, folded along the midrib or not ,with a V-shaped incision on the side opposite the leaf blade, in some species tubular in the basal part, appressed to the stem or not, hardly to distinctly overlapping the one above, with membranous margin, at the articulation on either side with or without a flat, tooth-like, eventually weathering projection; leaf blade sessile, at an acute angle to the stem, ovate­lanceolate to linear, rarely ovate-oblong, index (2.8—)3.5—65. with entire margin, the top rather widely to very narrowly acute, sometimes obtuse, the nerves many, fine, inconspicous, the midrib above sunken, below prominent. Inflorescence a terminal, elongated, erect to curved, stiff, sessile, flattened to terete panicle with very short to rather long, unbranched partial inflorescences, the internodes mostly shorter to the top; bracts first order to the top of the inflorescence gradually shorter, distichous, when young appressed to the inflorescence axis, triangular to narrowly triangular, later the partial inflorescence either appearing when they are disintegrated, or breaking median through the bract, or pushing the bract aside, with many, fine, inconspicous nerves; partial inflorescences 1 to many in the axil of each bract first order, sessile, with several internodes unbranched, with 1—10(—20), often c. simultaneous flowers; bracts second order tubular to c. halfway, partly overlapping, the lowest 3 usually sterile, smaller than the fertile ones, all higher ones fertile except in A. mucronatum mostly the fertile one completely covering pedicel and ovary, with wide triangular to acuminate top. Flowers small, widely open or rather closed, not resupinate, but in A. stenophyllum the lip turned is away from the inflorescence axis. Pedicel .and ovary not clearly separated, straight, not twisted; ovary strongly ribbed. Sepals widely attached, recurved or not, top obtuse to strongly acuminate. Median sepal c. symmetric, concave, in A. paniculatum convex, 3—7-nerved, with pronounced midrib. Lateral sepals asymmetric, concave, ovate, 3—7-nerved, with a more or less pronounced keel. Petals rather narrowly attached, (almost) symmetric; top obtuse to long caudate; 3—5-nerved. Lip sessile, in most species immobile, divided into a distinct hypochile and an epichile, in some boat-shaped, in A. megalurum petal-like; hypochile saccate, with erect or curved lateral lobes, the callus on the junction with the epichile transverse, plate-like, its margins lateral adnate to the lateral lobes; epichile (rather) widely sessile, flattened, more or less recurved, ovate to orbicular; surface without keels, but sometimes median at the base with 2 longitudinal thickenings or calli, its margin entire to erose, undulate or flat, its top rounded to acuminate. Column rather long to short, club shaped; stelidia, stelidium—like lobes, a callus or a transverse fold present or not; stigma near the top of the column, concave, with an elevated rim, in A. megalurum and A. emarginatum rims not or hardly pronounced, the rostellum a thin rim forming the front margin of the clinandrium; clinandrium terminal, with low erect margins clasping the anther which in front continue into the rostellum; anther terminal on the column, 2-locular, globose, reniform, or ellipsoid; pollinia 8, on a common, minute viscidium, often unequal in size. Fruit a fusiform capsule, with at least the column persistent, 6-valved, valves about equally wide, 3 valves with a low rounded longitudinal keel. Seeds fusiform, mostly c. 0.02 cm long.
(after M. D. Weijnen, manuscript 1991)

Epiphytes on trunks or major branches of trees, the high altitude ones often in moss cushions, or terrestrial plants, with erect or sometimes (sub)pendant stems, in primary and secondary forest from sea level to montane areas, sometimes along rivers, on o

2a. Transverse callus of lip distinctly present. Column below the stigma depressed or with a cross-groove. Hypochile more than 0.1 cm high == 3
2b. Transverse callus of lip (almost) absent. Column below the stigma not depressed, without cross-groove. Hypochile (if distinct from epichile) less than 0.1 cm high == 9